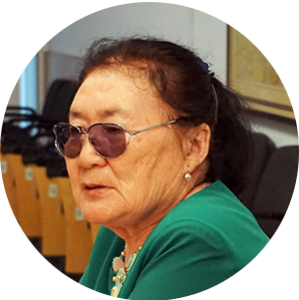 Born 1947, Yakut academician, social activist and spiritual leader. She graduated from the Leningrad State University in 1971. She received the degrees of Doctor (Candidate) in Psychology in 1985 and Doctor of Science (Doctor) in Sociology in 1995. Between 1991 and 1998, she was the Head of the Ethnopsychology and Philosophy Department and the Deputy Director of the Institute for Research of Indigenous Peoples (Siberian Branch of the Russian Academy of Sciences). In 1998–2003, she served as the Deputy of the State Assembly of the Republic of Sakha (Yakutia). Currently, she works as the Director of the Center of Circumpolar Civilization and a Professor of the Arctic State Institute of Culture and Arts in Yakutsk, Russia. She has been actively involved in social projects in the Russian Arctic, including revitalization of indigenous languages and ways of living, preservation of sacred places, and ecological initiatives. Her bibliography covers more than 400 publications, including 26 monographs.